Strategy For Those Who Want The Best

Make Your Company or Department More Profitable and Effective, Start a Business, Improve Your Non-Profit, Align Your Social Group, Start or Boost a Career, Win a Promotion, Realize a Life-Long Ambition

The Secret to Success Is Good Strategy

By Taking This Course

How to Get the Most from the Course

What to Expect from the Course

What You Can Do After Taking This Course

This video program will help you become more successful by helping you learn how to develop and use strategy for your company, your projects, and your personal life. The program consists of 22 basic lessons presented in one or more ten to twenty-minute videos that explain the Prometheus Strategy Process. In addition, there are How To videos associated with each section that will help you with the mechanics of strategy building. You can watch these videos just to learn the process after which you can apply it on a daily basis, or you can develop actual strategy for yourself or your organization as you progress through the program. As a review and to test your progress, take the quizzes at the end of each section of the course. 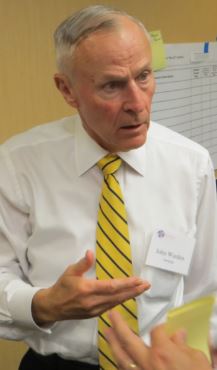 John A. Warden III is an executive, strategist, planner, author, and motivational speaker whose work has had a worldwide impact in business, in the military, in government, and in education. Vietnam combat pilot, author whose books include The Air Campaign and Winning in FastTime, Air Force Fighter Wing Commander, credited by Norman Schwarzkopf and Colin Powell as the architect of the Desert Storm Air Campaign, Special Assistant to the Vice President of the United States, Commandant of the Air Force’s Command and Staff College, successful business founder - he has capitalized on his studies and experience to create the Prometheus Process, a unique approach to strategy and success applicable wherever competition exists.

He has written numerous articles on the future, new strategy (business and military), aerospace power, acquisition reform, and campaign planning. The Desert Storm Air Campaign was based on his revolutionary concept of “the enemy as system” in which military forces are considered parts of a much larger whole. He wrote the seminal work on modern airpower theory, The Air Campaign: Planning For Combat , which has been translated into at least seven languages.

He has appeared on FOX, CBS, CNN, MSNBC, PBS, the Discovery Channel, the History Channel, the National Geographic Channel, the BBC, NPR, numerous radio talk shows around the country and is frequently featured or cited in newspapers and magazines with global circulation such as Forbes, Time, the Economist, USA Today, and Newsweek.

To View A More Detailed Bio

When does the course start and finish?
The course starts now and never ends! It is a completely self-paced online course - you decide when you start and when you finish.
How long do I have access to the course?
After enrolling, you have unlimited access to this course for as long as you are subscribed - across any and all devices you own.
What if I am unhappy with the course?
We would never want you to be unhappy! If you are unsatisfied with your purchase, contact us in the first 30 days and we will give you a full refund.
Should I go through the lessons in order?
Most of the lessons build on each other and use concepts and vocabulary introduced in an earlier lesson. so it will generally make sense to go through the lessons in order. In addition, if you are building strategy, you will want to build the appropriate section of strategy after each relevant lesson. That being said, however, you can skip around the lessons as you desire.
Will there be any more content?
We plan to add detailed “How To” videos for each strategy component and we plan to add videos that go into more detail on many aspects of the course. As a subscriber, you will have full access to this added content.
My company would like to have many of our employees go through this course. Are there special rates available?
Companies that want access for multiple people or groups should get in touch with Venturist, Inc., for very attractive multi-user rates.
Is there a certificate of completion?
Yes and it may meet requirement for some professional education continuing education requirements. You may also want to reference it on your LinkedIn profile as have several Prometheus Academy graduates.
off original price!